The Battle of Metz stalled due to material and fuel shortage.


The battle for and around the ancient city of Metz began well before the 10th Armored entered the fray. The Third Army, under General George Patton had been activated in August in Normandy. Then, beginning in late July the swept across 400 miles of France in one month. It got to the Lorraine region where it met the German First Army intent on defending the line along the Moselle River. This began the Battle of Fortress Metz.

Here is a summary of the battle for Metz prior to the beginning of November. It is abridged and adapted from the Warfare History Network.

Metz before the 10th Arrived
The 12th Army group was running short on fuel. On September 25 12th Army Group commander Lt. Gen. Omar Bradley had ordered Patton to go on the defensive. That meant that Patton was unable to follow up his plan that might have allowed his troops to reach the West Wall before the onset of bad weather.

Patton was too impatient to sit idly by with German forces within striking distance and no amount of  grumbling would help. At the end of September 1944 fuel wasn’t the only commodity in short supply for the Third Army. Patton’s men also lacked howitzer ammunition, rain gear, blankets, and sufficient rations. Morale dipped as a result, and Patton set about finding a way to keep his troops in the fight––regardless of the dismal supply situation.

[He] submitted to Bradley a plan …to continue limited offensive operations. “The whole plan was based … on maintaining the offensive spirit of the troops by attacking at various points whenever my means permitted it,” Patton wrote in his memoirs. In addition to keeping his various units in fighting trim, these limited attacks were meant to adjust the Army’s line in key places so as to give the units favorable departure points for resuming full-scale offensive operations once more fuel became available.

Meanwhile Supreme Commander of the Allied Expeditionary Force General Dwight D. Eisenhower and his staff envisioned a two-pronged offensive to capture the Ruhr and Saar industrial regions that fed the Third Reich’s belly. … First Army and Ninth Army would lead the primary attack against the larger Ruhr in the north, while in the south General George Patton’s Third Army would strike at the smaller Saar and therefore face Metz.

Metz was an  ancient, 1500-year old fortress town on the Moselle River. It had been virtually  indestructible over the previous millennium with defenses that had prevented any army from conquering the city since Atilla the Hun in 451 AD. The sprawling fortress system spread six miles west of the River and reached back another four miles to the east of the old city. Metz was therefore the most heavily fortified city in Europe at the time, consisting of 43 forts arrayed in an inner and outer belt that together mounted 128 heavy guns.

Bradley arranged for Patton to receive three fresh, untested divisions for the upcoming offensive…  [One of these was] Maj. Gen. William Morris’s 10th Armored Division, which did not take up its place on Walker’s left flank until November 2. Patton waited as the battle went nowhere for a month and a half.


The fuel began arriving the first week of November. The only thing holding the Third Army back now was the inclement weather- neither the first nor last time that the weather would have an impact. Heavy rains transformed fields into quagmires, swept bridges off their moorings, and made existence miserable for GIs who lacked the most basic foul-weather gear. Shortages of galoshes and waterproof shoepacs caused an epidemic of trench foot.


It was in this stalled offensive that the 10th Armored Division would soon get its introduction to war.


The 10th Armored Division and Buddy’s 80th Armored Medical Battalion were spending their last day on the Cotentin Peninsula. Tomorrow morning at 0405 they will start their move toward the war.

Back in July I posted about the popular music of 1944 and its place in the home culture during the war. It is interesting to note that there were two ways music added to the war culture. One was the popular music. Some of the pop songs were aimed at the moods and emotions of wartime and others were the tunes heard by the troops as reminders of home and those they were missing. Since 1941 these included reminders and longings of everyone:

Other pieces were written by “classical” and other composers to inspire and uphold the values of the United States. They were not pop culture as much as they were ways of maintaining the morale of those at home.  One example is Aaron Copland’s Fanfare for the Common Man (1942).

One song has inspired me since the first time I played it in band more than 50 years ago. It was based on a war-related song written long before World War II- When Johnny Comes Marching Home. According to Wikipedia it was “a popular song from the American Civil War that expressed people's longing for the return of their friends and relatives who were fighting in the war…. [It]was immensely popular and was sung by both sides of the American Civil War." (Link)

Morton Gould (1913-1996) was an American composer, conductor, arranger, and pianist. He did everything from symphonies to Broadway. His range and ability to cross styles and genres made him a remarkable musician. In World War II he was called upon to write a piece for inspiration to America. He chose When Johnny Comes Marching Home Again and titled it, American Salute. I have played it countless times and it never fails to move me. Here, talking about his ability, is a description from a U.S. Marine Band booklet on Gould.

Nowhere is [his skill] more evident than in his iconic “American Salute,” based on the tune “When Johnny Comes Marching Home.” Written in 1942 in the early days of World War II, it was composed at the request of a government radio program producer who wanted a “salute to America.” The composer insisted that he had no idea that the work was destined to become a classic: “It was years before I knew it was a classic setting. What amazes me is that critics say it is a minor masterpiece, a gem. To me, it was just a setting. I was doing a million of those things.” A million may be an exaggeration, but not by much. The pace of Gould’s schedule in those days is astounding. By his own account he composed and scored “American Salute” in less than eight hours, starting at 6 p.m. the evening before it was due (with copyists standing by), and finishing at 2 a.m. Although the ink couldn’t have been dry, the score and parts were on the stands in time for rehearsal the next morning and ready for broadcast that evening. (Link)

Throughout the years I have been researching, reading, and writing on my Dad and World War II, I have attempted to keep the music and atmosphere of the times in mind. Beula, my grandmother, talked very little about the popular culture of the day simply, at times, mentioning that they went to "a show." Underneath it all was often the music of the day. As I listen I can feel the connection of culture, longings and fears, and the hopes of those times 75 years ago.


1st Letter from Buddy. He arrived in France all OK. Said he had a nice trip going over. Dora called and said she received a letter also
— Diary entry, Beula Keller Lehman

In general, as applied to infantry units,

The Medical Battalion was organized as a kind of ‘miniature’ medical organization in order to maintain the best operative coordination of all the existing facilities and to give flexibility to a possible expansion of the medical service when necessary. It always accompanied the Division in the field! (Link) 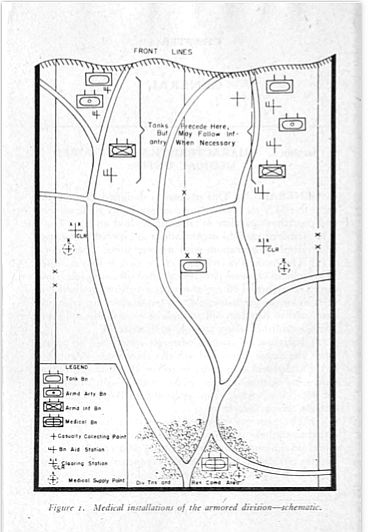 (P. 2; Armored Med Units Field Manual 1944)
Like the infantry battalions, the armored battalions needed to be ready to move at quick notice. The Armored Medical Units Field Manual, 1944 has specifics about how and what to do in advancing or “retrograde” movements.  It also gives these details about the general organization of the companies of the medical battalions:

The armored medical battalion is a flexible, highly mobile unit capable of accompanying combat elements of the armored division. It is composed of a headquarters and headquarters company and three identical medical companies.

21. FUNDAMENTALS OF EMPLOYMENT, a. The medical battalion provides second echelon medical service by the collection, treatment, clearing, and evacuation of the sick and wounded of the division. It is self-contained administratively and technically, having its own maintenance, administrative, and supply organization.

b. Flexibility of the medical battalion is always maintained. The battalion is organized to be responsive to any demand made upon it for reinforcement or support. It can function as a unit, or its several major components may be broken down into lesser elements to support tactical groupings. In combat, usually one medical company supports each combat command. (p. 25)

Undoubtedly they had received a great deal of training on this in the States prior to leaving. Here they bivouacked and most likely learned the ins and outs. It had to become second nature, I am sure, to be able to do what was needed in difficult and dangerous circumstances. This was all preparation time. After they had set up the bivouac in the rain on 23 September, the morning reports through 25 October simply say:

Meanwhile, since the 10th/80th had arrived in the European theater:

◆    75 Years Ago
◆    25 September 1944
Operation Market Garden ended. It had begun on 17 September when Allied paratroopers landed in the Netherlands and Germany. They did not cross the Rhine and ended with an Allied defeat.

◆    27 September 1944
The Battle of Metz began. It would stall and then not be finished until Patton, the Third Army, and the 10th Armored joined later in the fall.

A piece of family “lore” comes to mind as I work on these early days in Europe. My aunt, Buddy’s sister, Ruth, told me a number of times that the family believed that when he went overseas he was actually too old for the deployment into battle. In October 1944 he was actually about a month shy of 39 years old. It is important to also remember that Buddy had lied about his age when he first enlisted in 1940, saying he was a year younger than he was. As far as the army was concerned, as he bivouacked in France he was not even 38 yet. I was told that Dora and the family tried in vain through letter writing to get him discharged prior to his deployment. They were told by one of his superiors, however, that he wasn’t going to let a medic as good as Buddy be discharged.

Whether he was too old, should have been there or not, Europe was where he was- a medical corpsman with Patton’s Third Army and the 10th Armored Division about to be part of the last seven months of the war in Europe. In pictures that I have of that era, he almost stands out like someone who shouldn’t be there. He is clearly older than most of the guys around him. He is an elder among his band of brothers.
at October 02, 2019 No comments:
Email ThisBlogThis!Share to TwitterShare to FacebookShare to Pinterest
Labels: 10th Armored, 1944, 80th Armored Medical Battalion, family, France, medical training, World War 2, World War II, WW II
Newer Posts Older Posts Home
Subscribe to: Posts (Atom)