My dad had been home for around 10 days on furlough. It was time to head back to Georgia and Camp Gordon. Grandma’s diary simply records that she got up at 8:00 (early for her), got dinner, and then “took Buddy to the station at 2-.”

Meanwhile in Georgia:
The troops that were not on furlough over Thanksgiving had their own feasts. Since they had formed in 1942, the 10th Armored Division, the Tiger Division, had produced a newspaper:

From Vol II, No. 11 on Dad’s birthday, they had the following information about the upcoming Thanksgiving: 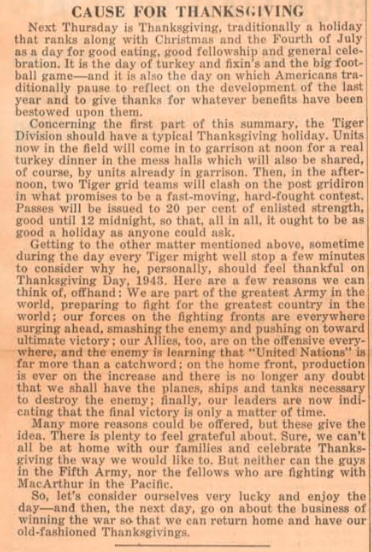 "Next Thursday is Thanksgiving, traditionally a holiday that ranks as a day for good eating, good fellowship and general celebration. The Tiger Division should have a typical Thanksgiving holiday. Turkey dinner in the mess halls. Two Tiger grid teams will clash on the post gridiron in what promises to be a fast-moving, hard-fought contest.
Sometime during the day every Tier might well stop for a few minutes to consider why he, personally, should feel thankful on Thanksgiving Day 1943. Here are a few reasons we can think of: We are part of the greatest Army in the world, preparing to fight for the greatest country in the world; our forces on the fighting fronts are everywhere surging ahead; on the home front, production is ever on the increase and there is no longer any doubt that we shall have the planes, ships, and tanks necessary to destroy the enemy;… there is plenty to be grateful about… So lets consider ourselves very lucky, and enjoy the day— and then, the next day, go on about the business of winning the war so we can return home and have our old-fashioned Thanksgivings."
at November 25, 2018
Email ThisBlogThis!Share to TwitterShare to FacebookShare to Pinterest
Labels: 10th Armored, 1943, 80th Armored Medical Battalion, Buddy's War, Jersey Shore PA, medics, Thanksgiving, World War 2, WW2