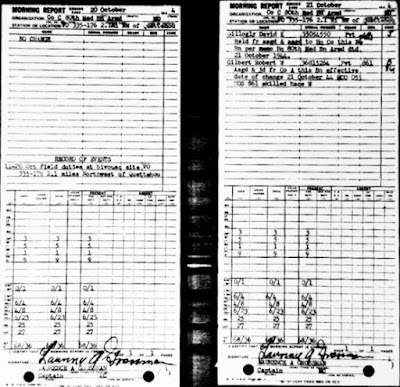 Through the next year there will be many references and quotes from the daily Morning Report of Company C, 80th Armored Medical Battalion, Buddy’s unit. The screenshot here is from two days ahead in October. The top locates the company and then lists any changes in personnel followed occasionally by a record of some events. The bottom section is an accounting of numbers of personnel in each of the categories, officers first, then enlisted men. Different units had slightly different styles of morning report forms, though they were all for the same general purpose.

Jennifer Holik at the WWII Research & Writing Center has a couple of good articles explaining both their use in the military during World War II and their value for researchers.


Company Morning Reports
A Morning Report was created each day outlining events of the prior day for the events of a Company. …Morning
Reports listed many details about the company which include:
◆    The location of the company for the date of the report.
◆    Strength of the unit in numbers of men
◆    Details of those entering and leaving the company
◆    Names of those declared AWOL, Missing In Action, Killed In Action, or wounded.
◆    The reports also provided information on the day’s events. Some clerks reported weather conditions, in addition to the usual information on where the unit was fighting, and other enemy encounters.

The companies were required to report numbers of men at each meal, which provided information to the Army, who then was able to provide food and appropriate supplies for the soldiers. These numbers also alerted headquarters when the ranks were depleted and replacements were needed. (-Link)


I have been able to obtain the Morning Reports for Co. C for the entire time in Europe beginning with today, 1 September 1944. They have given me invaluable information on where my Dad’s company was every day and, when appropriate, a record of events. Whenever I use one of the reports I will note it with (MR).
at September 01, 2019
Email ThisBlogThis!Share to TwitterShare to FacebookShare to Pinterest
Labels: 10th Armored, 1944, 80th Armored Medical Battalion, Buddy's War, Camp Shanks, morning reports, World War 2, WW II