Departed at 2120 from Camp Shanks, N.Y., for NYPE…via rail and ferry. Embarked 2320 to USAT Edmond B. Alexander for Overseas destination and permanent change of station. (MR). 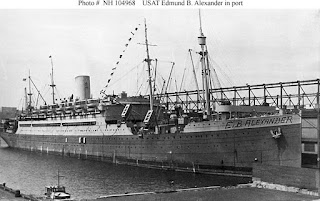 USS America (ID-3006) was a troop transport for the United States Navy during World War I. She was launched in 1905 as SS Amerika by Harland and Wolff in Belfast for the Hamburg America Line of Germany. As a passenger liner, she sailed primarily between Hamburg and New York. … In April 1931, America ended her service for the United States Lines and was laid up for almost nine years.

In October 1940, America was reactivated for the U.S. Army… renamed USAT Edmund B. Alexander. … and was refitted for use as a troopship for World War II duty. At the end of the war, Edmund B. Alexander was converted to carry military dependents, remaining in that service until 1949. She was placed in reserve until sold for scrapping … to the Bethlehem Steel Company of Baltimore, on 16 January 1957 and was broken up a short time later. (Wikipedia)


Sailed on USAT Edmond B. Alexander at 0300. Ran aground while leaving harbor. Debarked at 1330 via harbor boat for transfer to USAT Brazil. (MR)

It was high tide, Nichols reported in Impact!, with heavy fog as they “slipped from the pier” and ended up stranded on a sand bar 200 yards from land


Sailed on USAT Brazil at 1730 for PCS [permanent change of station] and overseas duty. (MR) 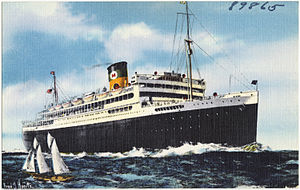 SS Brazil was a US turbo-electric ocean liner. She was completed in 1928 as SS Virginia…
Bethlehem Shipbuilding Corporation's 56th St Shipyard in Brooklyn, New York undertook Virginia's refit in 1938, then renamed Brazil.

From 1942 to 1946 she was operated by the War Shipping Administration as a troopship. In October 1944 she arrived in Boston carrying US Army personnel and prisoners of war from Europe. [This was most likely the return trip that had taken Buddy and the 80th Medical Battalion to France.]