Got up at 10. Went to the store. Did some cleaning. It is a beautiful day.
Diary, Beula Keller Lehman

Not a great deal happened in January for the 10th as a whole. CC-A and CC-R spent the first 16 days at Metz. During that time, Nichols tells us in Impact!, that


The Division’s battalions, which had been shot up during the Bulge, were considerably strengthened with tough and experienced replacements. Almost all of these fighters came from an airborne division which has participated in a disastrous jump in Holland months before. After recovering from their wounds in hospitals, they were sent to the Tenth and proved to be superb in combat. [While plans for return to action were made,] the rest of the Division was engaged in training the new replacements.

By mid-month, after its historic and heroic defense at Bastogne, CC B had rejoined the Division. The whole 10th Armored then moved to be in a position for the renewed offensive in the Saar-Moselle Triangle. Division HQ moved first from Metz to Dieuze, FR (17 Jan 45) then to Falquemont, FR (22 Jan 45) where they would remain until mid-February. This will be the last time the HQ and troops stay in one spot for more than a week until the end of the war.


This time, the elements, not the enemy, made the movement south one of the most difficult ever attempted by the Division. Rain and snow teamed up to send one Tiger vehicle after another off icy roads and into the ditches.

He tells the story of one sergeant who discovered that some simple hand pressure on the side of the tank was helpful It was a “treacherous" 180-degree turn near Falquemont. That pressure was enough to provide the needed traction.

According to the Morning Reports, Buddy’s Company C of the 80th Medical Battalion had been doing “usual organizational duties” both before and after they moved from Metz on 17 January. They ended at Eschwiller on 20 January where they would remain until mid-February.


Got up at 10. Went downtown. Cleaned some and rested for I am tired. Mrs. M____ was in this evening.
Diary, Beula Keller Lehman 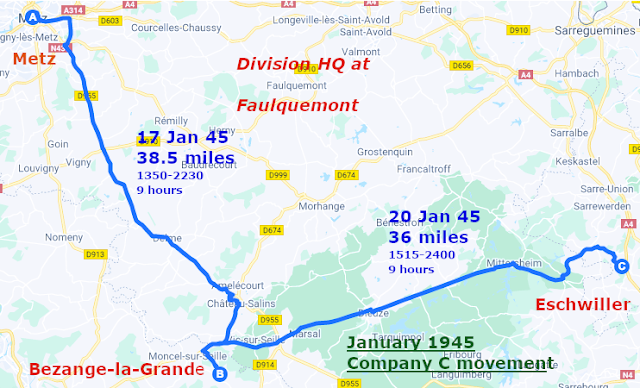 Both of these movements started in the afternoon and lasted well into the night. The pace of around 4 mph was necessitated by weather and road conditions. But I also would guess that part of it was a nighttime movement in order to avoid detection by enemy intelligence. Through this whole time, Co C was assigned to CC-A.


Got up at 10. Went to the store. Packed Buddy a box and sent it. Wrote to Buddy, Ruth, and Dora. Father and I went to banquet down at the I.O.O.F. Hall. Had a nice time. Of course I got a pain. Had to take a pill.

Beula, who was 69 at this time, has had some type of health problems for years. In 1940, after Buddy had left home, she spent a month in the hospital in apparently critical condition. Throughout these years in her diaries, she often mentions not feeling well, suffering from some type of pain, feeling tired. She would live another 3 years, dying in January 1948 of a cerebral hemorrhage caused by high blood pressure. I never met her as she died eight months before I was born.


Got up at 9:30. Washed and ironed the kitchen curtains. Wrote to Buddy. Had a letter from Buddy. Gee but it is cold today.
Diary, Beula Keller Lehman