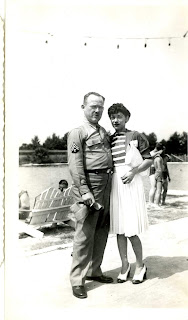 
A letter from Buddy and one from Dora and she sent me some pictures of Buddy. Wrote to Buddy and sent him a nice wedding present.


Got a lovely pocketbook from Buddy and Dora.


Letter from Dora w/picture of her and Buddy
— Diary Entries, Beula Keller Lehman

Separate letters from each of them and an obvious Mother’s Day gift from both. Over the two years he has been gone from home,Buddy appears to have been conscious of his mother and was a dutiful son with regular letters. Of course in those days it was a very common form of communication. Beula was writing letters to either Harold or Ruth at least three times per week. It cost money to make phone calls. A letter was 3 cents! (In 2019 money that is still only 43 cents! In spite of what we hear from time to time about the cost of letters, etc. They were- and remain- a very economical way to connect. ) It would appear that this has just become even more necessary than in the past. He would have been aware, I am sure, that his family is now in a state of shock over what has happened. Dora would have been just as aware from her side. Perhaps she understood the implications better than he did. Being aware of possible issues, she is no doubt trying to be a good daughter-in-law.

Beula seems to be accepting it- at least on the pages of her diary- and is  grateful. The two women will be facing some difficult separation ahead. Perhaps it was a good thing to make sure they were on good speaking terms. It is a new family for both of them.
at May 29, 2019
Email ThisBlogThis!Share to TwitterShare to FacebookShare to Pinterest
Labels: 10th Armored, 1944, 80th Armored Medical Battalion, Buddy's War, family, history, Jersey Shore PA, memories, memory, World War 2, World War II, WW II, WW2