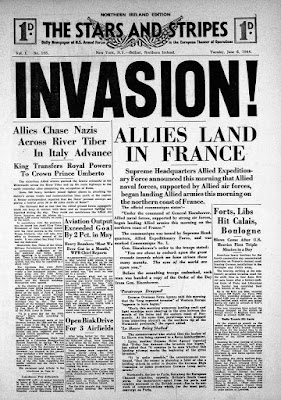 
Your task will not be an easy one. Your enemy is well trained, well equipped and battle hardened. He will fight savagely.

But this is the year 1944! Much has happened since the Nazi triumphs of 1940-41. The United Nations have inflicted upon the Germans great defeats, in open battle, man-to-man. Our air offensive has seriously reduced their strength in the air and their capacity to wage war on the ground. Our Home Fronts have given us an overwhelming superiority in weapons and munitions of war, and placed at our disposal great reserves of trained fighting men.

The tide has turned! The free men of the world are marching together to Victory!

I have full confidence in your courage and devotion to duty and skill in battle. We will accept nothing less than full Victory!

Good luck! And let us beseech the blessing of Almighty God upon this great and noble undertaking.
― Dwight D. Eisenhower

Our sons, pride of our nation, this day have set upon a mighty endeavor, a struggle to preserve our Republic, our religion, and our civilization, and to set free a suffering humanity.
― Franklin D. Roosevelt


The waiting for history to be made was the most difficult. I spent much time in prayer. Being cooped up made it worse. Like everyone else, I was seasick and the stench of vomit permeated our craft.
— Pvt Clair Galdonik, 359th Infantry Regiment, U.S. 90th Division


When Allied troops stormed the beaches of Normandy... most Americans slept—news of the invasion wouldn't reach the United States shores until 3:32 a.m. EST, when General Eisenhower's Order of the Day, a message recorded for the troops going into the invasion, was read over American radio stations. President Roosevelt himself wasn't briefed of the invasion's status until a mere 30 minutes before the American public found out. (-Link)

At the end of the first day, 156,000 Allied troops had come ashore at Normandy. It was the first successful opposed landing across the English Channel in eight centuries. 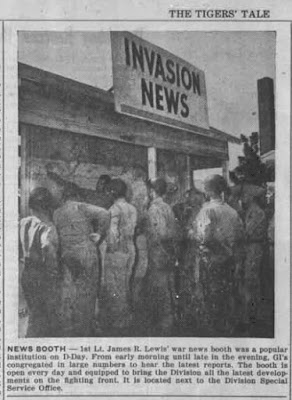 In Georgia, my Dad and the troops watched with interest. A successful invasion would mean they were that much closer to heading for Europe.  No one probably wanted to think about what it would mean if it weren’t successful. The Battle of Normandy lasted into mid-July.

About six weeks ago I was sitting outside enjoying a calm peaceful evening when I was struck by the contrast and similarities to what might have been happening 75 years ago. Since I have been absorbed by World War II for a number of years now, I realized that my writing and exploration of the war was about to get more intense.  Out of nowhere came the thought, “War is coming!” The war in 1944 was in full swing, of course. The Pacific War had begun to turn in the Allies favor and the African and Italian campaigns were quite successful. The Soviet Union had overcome the eastern front and was heading west. But the big event was yet to come. The invasion of Europe, code-named Operation Overlord, was well along in the planning stages and tension was great.

I know the outcome these seventy-five years later. But since part of my self-appointed task has been to follow my dad in the war, I also know that what I am seeing and feeling is more anticipation of what I will discover about Dad (Buddy), the world of 1944-45, and ultimately about myself. There have been a number of turning points in Buddy’s War so far from his running away from home in 1940 to activation into the 80th Armored Medical Battalion; from being part of the now famous 10th Armored Division to marrying my mother. D-Day meant the time was getting short.