The 10th Armored and attached troops have now been on the Cotentin Peninsula for a month. They have trained, planned, waited, and watched the weather. The troops were no less frustrated than Patton himself was. They were in Europe, but not yet in the war.

As October ended it became time to move. 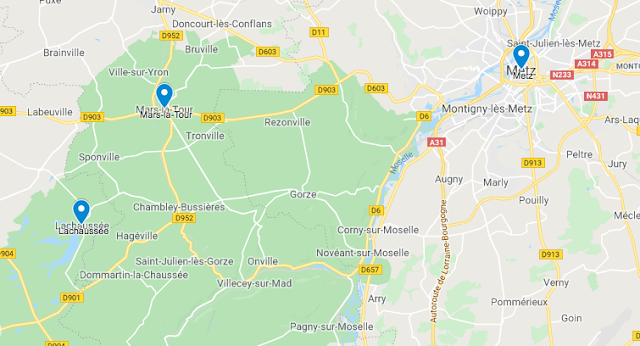 They were assigned to the Reserve Combat Command (CC R) and were located 8 miles south of the 10th's Division HQ at Mars Le Tour and about 20 miles southwest of the fortress city of Metz where they would soon be engaged in their first battle.

They were bivouacked in an area that was unfortunately too small for movement. Then it rained and rained  providing a very muddy, but relatively quiet few days. Nichols in Impact says that it was perhaps the worst bivouac area of war for them. Their purpose was to assist XX Corps in the containment of enemy troops in preparation for the attack on Metz. They were to move around behind the forts and cut off the retreating enemy.

The 10th was to fall into line, one-by-one behind the 90th Infantry then move through providing support and cover. From all that was reported, it was not particularly  good geography (or weather) for the tanks, but the 10th managed and found its place.

When November and time for the battle around Metz came, the XX Corps (part of the Third Army) under General Walton H. Walker had a total of 30 infantry battalions, 500 tanks, and more than 700 guns. Their  plan had two phases. One was to destroy all German forces around Metz and then to switch the advance to the northeast to catch the enemy as they pulled out of Metz.

On November 2, 1944, the 10th was pulled into place and had their first awareness of combat. It was a generally quiet area and not much else was to happen for the next two weeks, but the enemy had been engaged for the first time.