Waiting for the Green Light
After arriving at the staging area at the end of October and knowing their place in the battle line, they waited! Buddy’s Company C of the 80th Medical Battalion stayed at Lauchassee, near the 10th Division’s HQ at Mars la Tour.

The Encirclement of Metz Begins 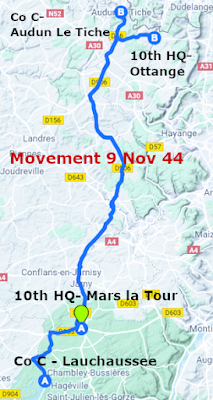 Buddy's Company was still assigned to the reserve combat command for this period. Their nearness to the division HQ continues to show that.

The 10th Armored Division was to be part of the encirclement of Metz. On November 9th they were assembled in the area around Ottange, far enough west to be safe from enemy observation. There they waited for General Walker to give the order committing the division east of the river.

The terrain in the zone assigned for the 10th Armored Division drive had little to recommend it to an armored force. The road net was limited. … Any cross-country movement would be most difficult, particularly after the autumn rains had beaten into the clay soil characteristic of this country.

On receipt of the order from the corps, it was supposed to cross the Moselle in two columns, pass through the 90th Division bridgehead wrested from the  Germans and strike quickly to effect a deep penetration. The capture of this sector would give the Americans command over one of the main corridors through which German reinforcements might be sent to Metz, or through which a retreat from that city might be made.

For five days … the 10th Armored waited for the word to cross the Moselle.  The five days were marked by orders and counter-orders, new plans and estimates--all contingent on the caprices of the flooded river and the degree of success achieved by the enemy gunners shelling the American bridge sites. At this point, the floodwaters of the Moselle were constricted by two relatively high retaining walls, and the stone piers of an earlier bridge still stood.

The 1306th Engineer General Service Regiment set to the task of building a Bailey bridge on 12 November, under orders to continue on the job regardless of enemy fire. German mortars and field guns threw in one concentration after another. Once, during the late afternoon of the 12th, work had to be suspended for a couple of hours.

On the morning of the 13th, the wind shifted, blowing away the covering smoke. German gunners laid their shells within a hundred yards of the bridge but could not get a direct hit. This time work on the Bailey continued, the engineers climbing into the superstructure clad in flak suits.


Finally, at 0930 on 14 November, the Thionville bridge was ready--the largest Bailey bridge in the European Theater of Operations. On the afternoon of that day, CCB (Combat Command B) began the move across the Moselle, the head of the column winding along the east bank northward to the 90th Division sector. Before daylight on 15 November, the whole combat command had assembled near Kerling (about 10miles NE of  Thionville) behind the screen formed by the 359th Infantry. 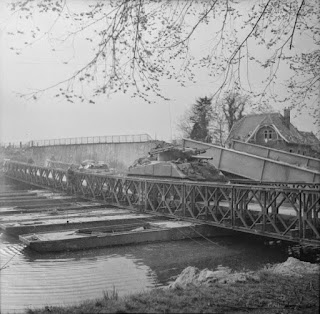 The Bailey bridge is a type of portable, pre-fabricated, truss bridge. It was developed by the British during World War II for military use and saw extensive use by both British and American military engineering units.   A Bailey bridge had the advantages of requiring no special tools or heavy equipment to construct. The wood and steel bridge elements were small and light enough to be carried in trucks and lifted into place by hand, without requiring the use of a crane. The bridges were strong enough to carry tanks.

A Combat Command was a combined-arms military organization of comparable size to a brigade or regiment employed by armored forces of the U.S.  Army from 1942 until 1963. The structure of combat commands was task-organized and so the forces assigned to a combat command often varied from mission to mission.  The combat command was a flexible organization that did not have dedicated battalions. Instead, tank, armored infantry, and armored field artillery battalions, as well as smaller units of tank destroyers, engineers, and mechanized cavalry were assigned as needed to accomplish any given mission.

This Combat Command organization would become very helpful to all concerned within the next six weeks when the Germans made their last push in what is known as the Battle of the Bulge.
at November 13, 2019
Email ThisBlogThis!Share to TwitterShare to FacebookShare to Pinterest
Labels: 10th Armored, 1944, 80th Armored Medical Battalion, Buddy's War, Metz, World War II, WW II