For Thanksgiving, Dora made her second trip to Pennsylvania since her new husband had deployed. Beula, as usual, shows no emotions in her diary about what is happening. Dora has become another person in her life who can help fill her loneliness. She and Dora go to the movies, visit Ruth in Bethlehem, sharing what must have been a very subdued Thanksgiving. Beula regularly comments that she receives letters from Buddy and that she writes back. There is never anything indicating she knows where he is or what is happening. Most likely, he downplayed the events knowing that in any case, the letters were censored.


In Europe, on November 21 Co. C was moved to support CC B. It was their first time on the “front line” and not with the reserve unit closer to Division headquarters. It would only last a week, but they were finally, truly, in the midst of combat casualties.


During this week that Buddy’s Company C was assigned to CC B:

⁃    21 Nov- the north column of CCB received a heavy counterattack just west of BUDINGEN but it was repulsed with heavy loss to the enemy.

⁃    22 and 23 Nov- CCB was patrolling to the front to determine exact location of enemy positions.

⁃    26 Nov- CCB cleared the woods east of WALDWISSE and then entered the town of BETHINGEN. Although the town was taken by surprise, heavy enemy artillery concentrations soon necessitated a withdrawal. General PIBURN now had three columns within four miles of his objective, the bridge of MERZIG. The head of the northern column was just east of BUDINGEN with a good road leading into the city of LERZIG.

⁃    27 – 28 Nov- The Germans had realized the importance of the city of MERZIG, the key to the SAAR Valley, and had taken extreme care to block all avenues of approach. The terrain along with the soft subsoil afforded the defender an excellent position. The roads, the only avenues of approach for armor, were covered with numerous roadblocks, which made going extremely slow.

[Co C reassigned back to reserve combat command (CC R) and they moved back to the vicinity of Division HQ.] 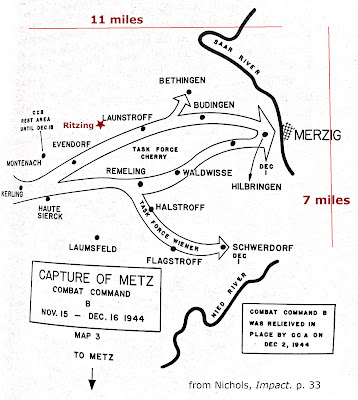 ⁃    29 Nov- Both the northern and the center columns of CCB pushed to the built-up area of HILBRINGEN, only one mile west of the bridge in the afternoon

⁃    30 Nov- As the elements of CCB were preparing to complete their mission of seizing the bridge intact over the SAAR River at MERZIG, a terrific explosion shook the area. The Germans had blown the bridge just as the engineers reached it.

All this action with CC B is taking place in an area smaller than the New York City borough of Brooklyn! It was 11 miles wide and 7 miles long.

It is interesting to note that there are no morning reports for Company C from 23 Nov - 29 Nov, the period they are assigned to CC B. While I have the end of the month After Action Report for the whole 80th Battalion which shows the activity at the clearing stations, it is not broken down by company. (I will post that at the beginning of December.)

~~~~~~~~~~~~~~~~~~~~~~
Following the 80th Armored Medical Battalion and10th Armored Division in World War II has given me a new perspective on the planning and execution of war. I have never been in the military; I have read many books (novels as well as non-fiction); I have watched many movies; I have never studied the tactics of warfare. It is intriguing and educational to look at war from a tactical perspective, even if it is with the “perfect” vision of seventy-five years.

The staggering number of troops involved is far more than my mind can handle. As I stare at the maps I realize that each map is but a small slice of a huge story, even within the area covered by the maps. I remember that the whole 10th Armored Division would have been between 10 and 15,000 troops.

The division was commanded by a major general, the combat commands by a brigadier general (who was also assistant division commander) and two colonels. The division included

Eastern France was a city in the mud and rain that November seventy-five years ago. To organize, direct and carry out the maneuvers must have been incredibly complex and, of course, based on the fact that the German troops weren’t just going to fall over and quit.

So I look at the maps and read the descriptions and am finally, after seven years of this, beginning to figure it out.

▪    First there’s the work of Combat Command A or B (CC A, CC B). CC A went one way with one job, CC B went another.
▪    Then there are the different Task Forces sent out from the Combat Commands. One might come in from the rear and another from a flanking maneuver.
▪    On top of all that this had to be coordinated with other divisions, Combat Commands, Task Forces, air support, medical support.

The movies make it look like all the tanks did was just barrel on forward crushing everything in their path. That is obviously not what happened. There were the days or weeks when a particular group might be less involved than at other times. There were the times after a battle when they could (sort of) relax.

How much could the medics relax? What could the soldiers do in the “downtime?” It must have been nothing short of maddening on some level of awareness that they must have had to sublimate, push away, forget.
at November 29, 2019
Email ThisBlogThis!Share to TwitterShare to FacebookShare to Pinterest
Labels: 10th Armored, 1944, 80th Armored Medical Battalion, Buddy's War, France, Metz, Thanksgiving, World War II, WW II