There were 33 officers and 364 enlisted men. During the month one of the battalion was killed and five wounded. Five replacements were assigned. [Note: The member of the battalion who was killed was not in Company C. No death is noted in the company's morning reports.]

The battalion commander had the following recommendations:


a. In some operations dissemination of information in regard to the tactical employment of the combat units did not reach this headquarters. Direct distribution of field orders and G-3 reports to the medical battalion would aid in the future employment of the supporting medical companies.

b. That all medical companies be employed in each action. ­ There is no useful purpose served by holding one entire company in reserve.

Looking at the daily admissions shows when the battalion's companies engaged in the heaviest battles. Again, from the 21st to the 29th, Company C was near the front. 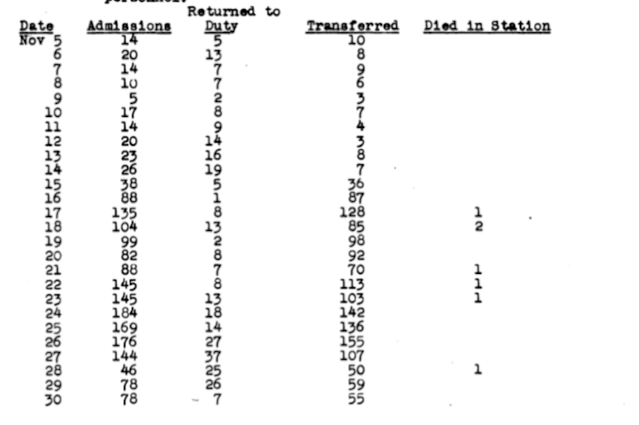 Buddy and Company C were now back attached to the Reserve Combat Command (CC R). Located at Sierck-les-Bains, they were less than two miles from Division HQ at Apach and still only 12 or so miles west of the front!

Filling in some of the background on the medical battalions and companies:


...the forward echelon of the Division Medical Service. They were the connecting links in the chain of evacuation between Aid Stations and Division Clearing Stations. Their mission was to:

Again, from the Army history:

The main task of the Clearing Company was to make decisions about what the next stage of treatment might be. This included such aspects as triage, sorting of casualties according to the nature and severity of their injuries, treatment- administering appropriate treatment to save lives, reduce suffering, and prevent permanent disability and determining which of the slightly wounded casualties could return to duty with their units.

(1) The medical detachment of the tank battalion moves in close support behind the tank companies, and directs its principal efforts at emergency treatment, either in vehicles or on the battlefield….

(3) [The] clearing stations reflect the characteristic high mobility of armor; they are organized and equipped with extremely mobile surgical trucks, and are capable of treating casualties in a short time after movement has ceased.
(pp. 1,2)

(2) Medical detachments- provide first echelon medical service. [That is, they were at the front, near the battle.]

(3) Armored medical battalion- provides second echelon medical service. [They were behind the front lines, but, as can be see above, still well within battle distance. The greatest range of German artillery was about 18 miles, but they were often hampered by logistics and lack of ammunition.]

The manual continues with more specifics for the battalions:


Standing Operating Procedure
The armored division operates tactically in two or more combat commands… formed for a particular operation. Normally an armored medical company is included in each of the two combat commands and a part or all of the Third Company in the reserve command.

Medical units follow procedures best suited for the medical support of their individual unit. During combat, because of rapidly changing tactical situations, it may be found impractical to follow a predetermined plan. The employment of the medical detachments and the medical battalion is kept flexible and within control so that unforeseen tactical developments may be dealt with promptly.
(pp. 4-6)

A footnote to this history: What we are seeing in the development of this medical organization are the precursors of MASH units. (Wikipedia)
---------------------

Other unforeseen- or unplanned for issues always arose.
The most glaring example in these early months of the 80th Medical Battalion- and most of the medical groups in the area had nothing to do with battle.

It was trench foot.

Poor planning and a sense that the war might not last all that long now that the Allies were fully engaged led to one of the most surprising, unexpected medical concerns- trench foot. By all accounts, the fall-winter of 1944-45 was the coldest and wettest in years. Trench foot did as much damage to the Allies as the enemy due to its duration of disability and its tendency to recur. Inadequate winter supplies only added to the crisis. During November and December 1944 the total number of cases of cold injury on the Western Front was more than 23,000. This was the size of one and a half infantry divisions.

Gen. Omar Bradley Commanding General of the 12 Army Group wrote that this had seriously crippled the United States fighting strength in Europe. Medical officers estimated to Bradley that the majority who were evacuated from the front lines would never return to combat. At times this would reach as such as 38% of all hospital admissions to the 6 hospitals in the Paris area!  This obviously added to the burden at collecting companies like Company C and the 80 Medical Battalion! (Medical Department of the United States Army in World War II)