The Battle of the Bulge Begins


16 Dec-
All units of the 10th Armored Division were alerted for movement north with the mission of counterattacking a major German drive. Little more than this was known at Division Headquarters in the little town of Apach on the Moselle River just south of Perl.

While CCB moved to the vicinity of Bastogne to reinforce the troops in that area, CCA and the rest of the Division continued almost due north from Luxembourg City to protect the town from the threat of being overrun by the enemy. Everyone began to realize that the Major German Drive "was a serious affair indeed." (Note: the 10th Armored Division was the first US unit to be diverted from another mission to reinforce troops in the Bulge.)

My Dad's Company C of the 80th Armored Medical Battalion was on the move as well. 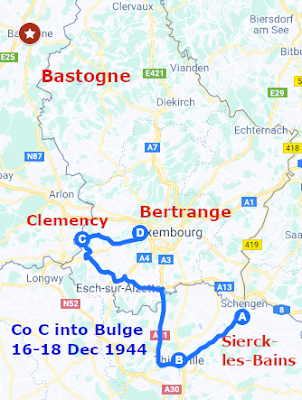 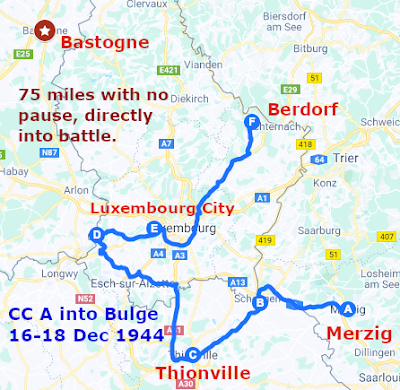 CC A completed a seventy-five mile march to an area some twenty miles northeast of Luxembourg City in the early morning of the 18th and went into action at once. Their mission - to protect the city. Their plan to carry out this defense --attack. This attack stopped German advances in Luxembourg. 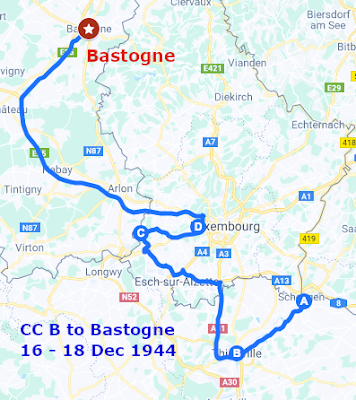 With CC B, Colonel Roberts led his column into the town of Bastogne late in the afternoon of the 18th. When he dispatched Teams Desobry, Cherry and O'Hare to defensive positions north and east of the town immediately, all hands realized that the situation was even more serious than most of them had suspected.

It is the beginning of the last-ditch attempt by Hitler to defeat the Allies. His goal was to push the Allies aside and rush to the northern coast at Antwerp. He expected it to be a blitzkrieg as the army had pulled off in the early days of World War II. Initially, for the Americans, it was a time of confusion and uncertainty. It will become the biggest battle the American troops will face in the entire war. It is difficult to follow all the movements since there are so many troops involved in a relatively small area. The numbers are staggering!


The initial German attack force consisted of more than 200,000 men, around 1,000 tanks and assault guns (including the new 70-ton Tiger II tanks) and 1,900 artillery pieces, supported by 2,000 aircraft, the latter including some Messerschmitt Me 262 jets. In the opening phases of the battle, they would be facing only some 80,000 men, less than 250 pieces of armor and about 400 artillery guns. Many of the American troops were inexperienced; the German force included battle-hardened veterans of the tough fighting on the Eastern Front, but they, too, had green units filled with boys and with men who normally would have been considered too old for military service.

During the course of the month-long battle, some 500,000 German, 600,000 American and 55,000 British troops became involved. The Germans lost some 100,000 men killed, wounded and missing, 700 tanks and 1,600 aircraft, losses they could not replace. Allied losses—the majority of them incurred during the first week—included 90,000 men, 300 tanks and 300 aircraft, but they could make up these losses. In addition, an estimated 3,000 civilians died, some during the fighting and others executed by German combat and security forces.

The Ardennes Offensive was a massive gamble on the part of German dictator Adolf Hitler, one that he lost badly.   (Link)


At first, Patton was not all that excited by having to delay his upcoming push. He thought that it was a small diversion by the German army to keep the Allies fooled. He quickly saw the danger and turned his troops on a dime- in and of itself an incredible accomplishment. By the end it would be one of the greatest battles in American military history- and make the final difference in the eventual outcome of the war in more ways than one.