30 Nov - 16 Dec- Regrouping in the Saar-Moselle Triangle
30 Nov – 1 Dec- Combat Command B (CCB) had almost reached its mission objective- the bridge over the Saar at Merzig. Just as they arrived, the Germans had blown it up. The next day,
December 1, 1944 CCB cleared Hilbringen, just west of Merzig, and continued to straighten its lines.  Company C of the 80th Armored Medical battalion had already been reassigned to the reserve Combat Command and was at Sierck-les-Bains, less than two miles from Division HQ at Apach

3 Dec – 16 Dec- CCB assembled in an area north of Remeling and the weary tankers began the move to an assembly area in the vicinity of Montenach, ten miles northeast of Thionville. In two and a half weeks of incessant combat they had reached their objective only to find their mission – the capture of a bridge across the SAAR in the vicinity of Merzig - incapable of accomplishment. Units, however, had received their baptism of fire and had ironed out many kinks in operating technique. These and other lessons learned proved invaluable in time to come.

[NOTE: CCA continued to occupy positions overlooking the Saar until just before the Division  move on the 17th of December. It engaged in no serious combat and was used primarily to "beef up" the depleted forces of the 90th Division who were primarily responsible for the zone. CCB remained in the Montenach area during the entire period.]
Information from a research report from the Officer's Advanced Course at the Armored School, 1948-49.

A summary of the Battle for Metz (edited)
from, U. S. Army in World War II
European Theater of Operations
The Lorraine Campaign
Chapter XIV- Conclusion
by Hugh Cole
(Link)

From beginning to end of the Lorraine Campaign the Third Army had liberated or conquered approximately 5,000 square miles of enemy-held territory. Tactically, the Lorraine operations of the Third Army had resulted in the loss to the enemy of three highly important defensive positions, those of the Moselle, the Nied, and the Sarre Rivers [and] had drastically reduced the German space for maneuver west of that river.

Strategically, the Third Army campaign … had forced the German high command to divert substantial forces from the defense of the Ruhr. … General Patton's persistent offensive during November and early December also had delayed the movement of key German divisions from the Third Army front to the strategic reserve that was being assembled, trained, and re-equipped for employment in the December counteroffensive. …  But the German forces had been so badly shattered in Lorraine that the Third Army was able to disengage on this front with relative ease as it turned to intervene in the battle of the Ardennes.

Losses inflicted on the German forces in Lorraine were high. Although the number of Germans killed and wounded cannot be determined with any degree of exactness, it is known that at least 75,000 prisoners passed through the Third Army cages during the Lorraine operation. It is impossible to give any reasonably accurate statement of German losses in tanks, guns, and vehicles. …

In November and December, however, American tank losses incurred in the course of the slow advance through the Lorraine mud probably were considerably higher than those of the enemy. The damage and destruction inflicted on German transport and artillery by the Third Army and the XIX Tactical Air Command were very much greater than that visited by enemy action on the Third Army. Matériel losses sustained by General Patton's command in the period 1 September to 18 December:
◦    Light tanks          105
◦    Medium tanks     298
◦    Vehicles           1,080
◦    Artillery (75-mm. and larger)     34

It must be added that the German ability to replace matériel losses in any category of equipment was markedly inferior to that of the Allies. If the campaign be considered as a battle of attrition, which indeed it was during the last weeks, the Third Army had done much on this secondary front to weaken the Wehrmacht.

[A German view of the Americans]
At the end of 1944 the German training staffs published a series of "Battle Experiences," containing the official enemy estimate of the American soldier, his tactics, and his weapons. … Since the "Battle Experiences" were prepared for and issued to the troops, they contain much that stems from the politico-military dogmas of the Nazi party or that obviously is intended to raise the morale of the individual German soldier.

Despite recognition that the individual American was a more skilled and tenacious fighter in the fall of 1944 than in the early weeks after the Normandy landings, the doctrine of the superiority of the German infantryman did not alter. Stripped of the numerous propaganda reasons put forth to support this allegation, the core of the argument is as follows:

•    the American soldier depends upon tremendous matériel support to bring the battle to a successful conclusion;
•    when he is denied heavy support by the combined arms the "drive" in the attack dwindles;
•    he avoids close combat, dislikes night fighting, and surrenders readily—
•    all symptoms of his poor quality as a soldier.

Besides including such derogatory comments, the German "Battle Experiences" described in detail those aspects of American tactics and techniques believed to be worthy of emulation. High on all lists was:
•    the effective cooperation between infantry and tanks, tanks and planes.
•    American artillery was an object of praise. It was distinguished, said German observers, by a
o    speedy system of communication,
o    accurate fire,
o    a plentiful supply of ammunition,
o    greater range than that of comparable German types,
o    skilled employment of artillery planes as aerial OP's, and
o    extensive use of white phosphorus. 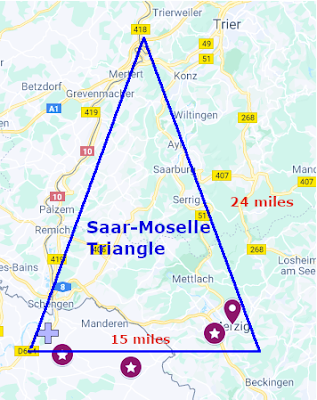 13 Dec- At this point in the month, the main direction of the Allies in the area continues to be the Saar-Moselle Triangle.

What happens next will be a surprise to all involved. It would appear that Allied intelligence had no idea that there was a major build-up of enemy troops, spreading out along a 75-mile battlefront. The goal would be to push the Allies west and open up a route for the Nazi troops to the port at Antwerp.  But today all was quiet. Mopping up was finishing on this phase and plans were ready for the next.
at December 11, 2019
Email ThisBlogThis!Share to TwitterShare to FacebookShare to Pinterest
Labels: 10th Armored, 1944, 80th Medical Battalion, Buddy's War, Metz, Saar-Moselle Triangle, World War II, WW II