Thirty years before the Battle of the Bulge the “miracle” of the impromptu Christmas Eve truce made history in the trenches of World War I. No such “miracle” occurred for the men in Bastogne and the Ardennes in 1944. It had been a week of continuing hell! Between December 19 and 24 Combat Command B (CCB) of the 10th Armored had fought its way around and into Bastogne. Words like “chaos, panic, and utter disorganization" were used to describe the hard-hit units.

22 Dec  1944
The tide of battle was about to shift though. Fuel shortages and pockets of American resistance had repeatedly stalled the German thrusts. Better still the days of sleet and low cloud, which had protected the Germans from Allied airpower, were about to end, according to the forecasters.   Meanwhile, Patton’s Third Army has been on the move. As has been said before, Eisenhower did not believe Patton when he promised that he would be at Bastogne by today; he had to disengage his men from battle on the Saar front, execute a 90-degree change of course and move over 130,000 vehicles 75 miles to the north.  But of course, he has done just that.  (adapted from A World War Two Chronology.)

And then there was the prayer. The following is from Scott Manning’s post about it:


Contrary to popular belief, the prayer was not ordered to be written during the Battle of the Bulge. It was on the 14th of December that General Patton had the famous exchange with Chaplain O'Neill to write a prayer for good weather and to give a copy to each member of the Third Army. The Chaplain mentioned that it's not a customary practice to pray for clear weather in order to kill fellow men.

Patton's response was direct, "Chaplain, are you teaching me theology or are you the Chaplain of the Third Army? I want a prayer."

After working out the logistics, each member of the Third Army (approximately 250,000 at the time) was issued a small card on the 22nd of December, 1944. By this time, the Battle of the Bulge was underway.

On one side of the card was the famous prayer:


Almighty and most merciful Father, we humbly beseech Thee, of Thy great goodness, to restrain these immoderate rains with which we have had to contend. Grant us fair weather for Battle. Graciously hearken to us as soldiers who call upon Thee that, armed with Thy power, we may advance from victory to victory, and crush the oppression and wickedness of our enemies and establish Thy justice among men and nations.

When Patton originally ordered the cards made, some of the General's men convinced him to include a Christmas greeting for the troops. It was at this time Patton took a seat at his desk beneath the contemporary ceiling fans and penned something special. On the reverse side, the card had a personal message from the General:


To each officer and soldier in the Third United States Army, I wish a Merry Christmas. I have full confidence in your courage, devotion to duty, and skill in battle. May God's blessing rest upon each of you on this Christmas Day.

The next day, the weather cleared and remained perfect for about six days while the Third Army pushed North to relieve the 101st Airborne at Bastogne.

Upon reviewing the weather, Patton said of the Chaplain, "God damn! Look at the weather. That O'Neill sure did some potent praying. Get him up here. I want to pin a medal on him."

The next day, the Chaplain made it to Patton's office. He shook the Chaplain's hand and said, "Chaplain, you're the most popular man in this Headquarters. You sure stand in good with the Lord and the soldiers." Chaplain O'Neill then received a Bronze Star Medal.

On Christmas Day, Patton wrote in his journal that the day "dawned clear and cold; lovely weather for killing Germans, although the thought seemed somewhat at variance with the spirit of the day." Patton went on to write how they managed to provide every soldier with turkey. Those in the front had turkey sandwiches while everyone else had hot turkey.

23 Dec  1944
Improving weather conditions permitted extensive air support, particularly in the Bastogne area, where 260 USAAF IX Troop Carrier Command C-47 Skytrains drop 334 tons of supplies on several drop zones inside the besieged American positions at Bastogne.   The German forces that had bypassed Bastogne did not have the strength or supplies because of the growing effectiveness of Allied air support. The US 101st and CC B of the 10th in Bastogne hold out.  The circumference of the ring around Bastogne would be approximately 25 kilometers.   (adapted from A World War Two Chronology.)
~~~~~~~~~
And then there's this historic tidbit...

22-24 Dec 1944
On December 22, the commander of the German army had sent word to General McAuliffe, acting commander of the 101st Airborne troops in Bastogne. The enemy commander had painted a bleak picture of the Allied position and insisted there was only one option to save the Allied troops from total annihilation.

The German surrender demand was typewritten on two sheets. One was in English, the other in German. This is the English version of the message:

To the U.S.A. Commander of the encircled town of Bastogne.

The fortune of war is changing. This time the U.S.A. forces in and near Bastogne have been encircled by strong German armored units. More German armored units have crossed the river Ourthe near Ortheuville, have taken Marche and reached St. Hubert by passing through Hompre-Sibret-Tillet. Libramont is in German hands.

There is only one possibility to save the encircled U.S.A troops from total annihilation: that is the honorable surrender of the encircled town. In order to think it over a term of two hours will be granted beginning with the presentation of this note. If this proposal should be rejected one German Artillery Corps and six heavy A. A. Battalions are ready to annihilate the U.S.A. troops in and near Bastogne. The order for firing will be given immediately after this two hours' term.

All the serious civilian losses caused by this artillery fire would not correspond with the wellknown American humanity.

The Division Operations Officer, Lt. Col. Harry Kinnard recalled that McAulliffe initially asked, "They want to surrender?" Moore told him, "No sir, they want us to surrender." McAulliffe arose and erupted in anger, which shocked those looking on. He took the paper, looked at it, said "Us surrender, aw nuts!"

Later, when told that the Germans wanted a written response, McAulliffe went down in history books. McAulliffe wondered aloud, "Well, I don't know what to tell them." At that point, Kinnard said, "What you said initially would be hard to beat." McAulliffe asked "What do you mean?" Kinnard, said, "Sir, you said nuts." All members of the staff enthusiastically agreed, so McAulliffe wrote it down on a message pad and said, "Have it typed up."

The reply was typed up, centered on a full sheet of paper. It read:

The tide is turning, but a lot of battle will continue. 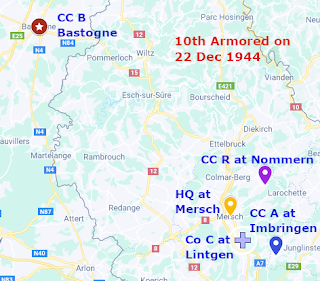 What about Buddy, my Dad?

No, he was not at Bastogne. He and most of the 10th Armored were down to the southeast of the besieged city. His Company C was at Lintgen where war was still being fought on the southern flank of the bulge, where his surgical unit and clearing company ministered to the wounded and dying.

Looking at pictures, movie clips and reading, it is very clear in my mind that it didn't matter where he was along the battlefront, it was, at best- hell.

A white, fog-bound hell. Snow, cold, the ever-present sound of battle- tanks, artillery, small arms. You name it- it was there.

One didn’t have to be in Bastogne to be in the Battle of the Bulge.   I will never be able to understand how he felt and how it impacted the rest of his life. I am grateful that I can get this sense of his life all these years after his death.

He was one of those citizen soldiers, part of his own band of brothers, facing the destruction of everything they knew. They fought back- or in my Dad's case- helped bring relief to those who did.

Perhaps for those like Buddy, dare I believe that may be the hope and the promise of grace in a heaven of peace.
at December 24, 2019
Email ThisBlogThis!Share to TwitterShare to FacebookShare to Pinterest
Labels: 10th Armored, 1944, 80th Armored Medical Battalion, Ardennes, Bastogne, Battle of the Bulge, Buddy's War, Christmas, prayer