Got up at 8. Put the turkey on. Had dinner. We just talked. [Ruth and Fred were there and then left on 6.10 bus.] It is raining. It is awful lonesome.
Diary Entry, Beula Keller Lehman

75 Years ago
26 Dec- The siege of Bastogne, for purposes of historic record, may be considered ended at 1645 on 26 December when the 326th Airborne engineers reported contact with "three light tanks believed friendly." True, the breach in the German-held ring opened by the 4th Armored Division was narrow and precarious, but it would not be closed despite the most strenuous enemy efforts in coming days. The staunch defense of Bastogne had impeded the Fifth Panzer Army drive to the west,…

The human cost of the Bastogne battle, therefore, probably was not out of proportion to the military gains achieved.

The 101st Airborne Division suffered battle casualties numbering 105 officers and 1,536 men. CC B of the 10th Armored Division had approximately 25 officers and 478 men as battle casualties. There is no means of numbering the killed, wounded, and missing in the miscellany of unrecorded tankers, gunners, infantry, and others who shared in the defense of Bastogne.
--From The Ardennes: Battle of the Bulge by Hugh M. Cole

As Nichols reports in Impact:
26 Dec- The Tigers’ Christmas present, though a day later, was delivered. The iron ring of German panzers was pierced and the rescue was begun… [H]ard  fighting was still required of all units.  This was necessary in order to widen the corridor during the ensuing days. At 1630 the 4th Armored Divisions CC R entered Bastogne.

27 Dec- Wounded were evacuated and supply trains wheeled in. Along with the supplies came swarms of war correspondents and official observers. The sickening sight of gutted buildings, smashed tanks and vehicles, was mute testimony of the hell that Bastogne had been for eight long days.

Meanwhile, the rest of the 10th Armored, minus CC B, was kept busy on the southern end of the bulge. On 26 Dec at 2000 hours the 6th Armored Division was sent to replace the 10th Armored which then swung south and continued to press the enemy along that front. They had been “jabbing and sparring” just north of the Saar-Moselle Triangle to keep the Germans off balance. At the center of this was Combat Command A (CC A). Their part of General Patton’s great offensive against the Bulge was a success.

28 Dec- 10th Armored’s defensive positions secured. The 10th (minus CC B) was ordered to “hold present sector to include the Saarlautern bridgehead. On Army’s order, advance north to clear enemy from between Moselle and Saar Rivers.” Their part of the Battle of the bulge was finished.


Had a letter from Buddy and he sent me a dime for good luck.
Diary entry, Beula Keller Lehman


31 Dec- All of the remaining 10th Armored (minus CC B) moved south to Metz for rehabilitation and training, ending the most hotly contested battle in the Division’s brief but rugged operational history since its November baptism of fire at the swollen Moselle. 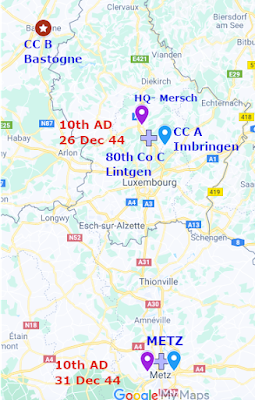 At Metz they were, for all intents and purposes, back where they had been two weeks earlier. They were now to get ready for the punch into the Saar-Moselle triangle that was Patton’s offensive plan  when the German offensive began and they headed into battle.