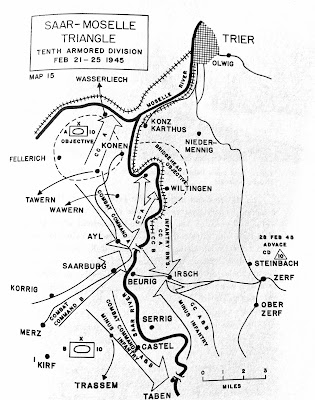 
The Tenth Armored completely cleared the Saar-Moselle Triangle in four days of slashing attacks, thus setting the stage for a new offensive east of the Saar.

It appears that Company C remained west of the Saar until the next day, no doubt due to casualties and evacuation of patients.

This is one of the few times that any casualty numbers are given in the Morning Report. I wonder if that was a way of noting that Company C had that number of evacuations on the same day as a company movement. The way it is written would seem to indicate that the evacuations occurred at Serrig after having arrived at 6:00 pm. In cross-referencing with the monthly After Action Report, the whole battalion reports 130 evacuations that day. It is possible that Company C moved when it did because its clearing station was needed. This would also be indicated by the apparent movement past Beurig where they will return the next day.

▪    27 February 1945
The 94th Infantry and its engineers had constructed heavy duty pontoon bridges at Saarburg. This gave one continuous bridgehead from Ockfen to Taben. (See map below)

According to Province’s timelines in Patton’s Third Army, all three of the Division’s Combat Commands were active during this period. By the 27th the 10th will be just 6 miles south  of Trier and by the 28th, within a mile. 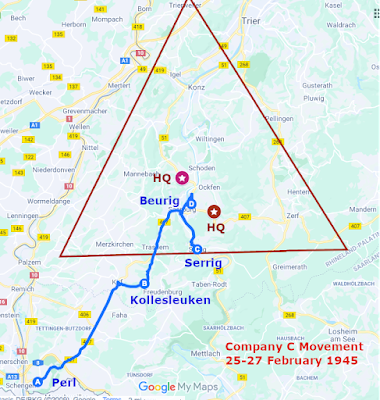 27 February- CC B was located on the heights overlooking Trier from the east. Their covering action appears to have been a life saver for many. Part of what CC B managed to do was, through the initiative of Colonel Roberts, "locate and make passable a cut-off that help speed up the attack." Originally the downhill route had to "navigate a sharp left turn and go uphill- all in the face of withering anti-tank fire…. Tiger vehicles, wrecked and burning, were mute testimony to enemy marksmanship." The cutoff with a sudden turn ended up fooling the Germans who were expecting the Division to continue on toward the Rhine. (Nichols) 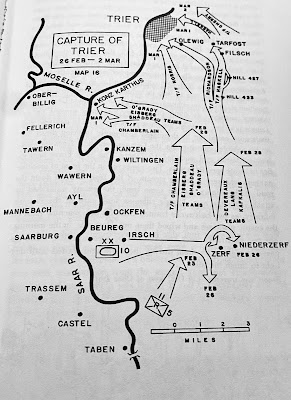 
Tonight the Tenth Armored “Tiger” Division stands on the threshold of Trier- leading elements at a late hour were less than two miles from the city- with four task forces moving steadily along the high ground overlooking this important communications and supply center. Behind the imminent nature of Trier lies a story of bold tactical operation. Eight days ago the division was given the sole mission of clearing the Saar-Moselle Triangle- a mission that was accomplished in two days, catching the Germans so completely by surprise that orders were suddenly issued for the Tenth Armored to cross the Saar…

Tonight… the entire division is now moving up the southern approaches within striking distance of Trier.

~~~~~~~~~
End of the Month
While there are a few more days before Trier is captured, I will pause here to give a quick glance at the end of this month in 1945.

After over a month of waiting, February thrust the full 10th Armored/80th Medical back into war. The 80th Armored Medical Battalion’s end of the month After Action Report shows the change that occurred in battle at the end of February. From 1 February to 22 February the battalion’s clearing stations had 715 admissions with approximately a 40% return to duty. (This is only an approximation.) The last six days of the month saw 1019 admissions with only a 3% return to duty. As would be expected the largest number  of admissions were seen on the 27th and 28th of the month as the Tigers headed toward Trier after clearing the Saar-Moselle Triangle. Hence my comment above on the day Company C arrived at Serrig.

Of the troops of the 80th, three enlisted men were listed as wounded. I am not sure whether any of these were from Company C. The Morning Reports are a little bit unclear and might indicate one such battle casualty. There were no deaths. During the month the 80th received 19 reinforcements- one officer and eighteen enlisted men. Company C reports they received at least 11 of those reinforcements with 9 coming from the 94th Medical Gas Treatment Battalion. This was the battalion that ran the Army Air/Rail Medical Evacuation Holding Unit which was located near Thionville. My guess is that as the Bulge ended, the Allies held more territory, and the war became a more mobile action the ability to evacuate more quickly ended the need for this type of a holding unit.

The recommendations made in the AAR included a call for a “practical system of collecting bodies from the Division clearing stations.” An automated every other day collection by graves registration was suggested. There were 11 deaths in the clearing stations in February. That number would double in March.

Rick Atkinson in The Guns at Last Light, the third in his monumental trilogy of the Second World War, gives us the background of why this concern may have been raised.


As fresh reserves came forward, legions of dead men were removed to the rear. Each field army developed assembly lines to handle five hundred bodies a day; … Innovative techniques allowed fingerprints to be lifted from bodies long buried and for hidden laundry marks to be extracted from shredded uniforms… Reuniting a dead man and his name was the last great service that could be rendered a comrade gone west.

Interestingly one source connected with the Department of Defense says that currently there are about 73,000 still “missing in action” from World War II. That is about 19% of the over 400,000 killed in action. Another source, also using official DoD statistics, lists the number at 10,000 or 2.5% although that may not include those officially listed as “missing in action”, only those as unidentified. There are, for example, no unidentified soldiers from Vietnam and 150,000 from the Civil War in this source. But whether it is 73,000 or 10,000 the loss of life represented in just those numbers is staggering!

Each life is personal. It is hard to think in such large numbers. That “last great service” of Graves Registration can be overlooked in he great scheme of battles fought and wars waged, but to each family whose family member was identified, it allowed closure. Large numbers can numb us to the true nature of war deaths. It is only those we knew personally, or can identify with that bring him the nature of such conflict. That is as staggering for each person as it is in the overall numbers.

General Patton
The 10th was under the direction of the Third Army and therefore the controversial and very famous General Patton. He was either loved or hated! I remember my aunt, Buddy’s sister, speaking in almost reverent tones when she mentioned his name, even twenty years after the end of the war. Stephen Ambrose in Citizen Soldiers: The U.S. Army from the Normandy Beaches to the Bulge to the Surrender of Germany Jun 7, 1994-May 7, 1945 gives a picture of Patton’s almost monomaniacal approach using as an example this period of the Saar-Moselle Triangle and the attack on Trier.


THROUGH February, Patton attacked, whatever the conditions. He was at his zenith. His energy, his drive, his sense of history, his concentration on details while never losing sight of the larger picture combined to make him the preeminent American army commander of the war. …

Patton's worst enemy was the weather and what it did to the roads. The nightly freezes, the daily thaws, and the heavy traffic combined to make them impassable. Patton at one point in early February was forced to turn to packhorses to supply the front line. Still he said attack.

On February 26 elements of Third Army captured Bitburg. Patton entered the town from the south while the fighting was still going on at the northern edge of town. About this time Patton was spending six hours a day in an open jeep inspecting, urging, prodding, demanding. …

History was very much on his mind. In the evenings he was reading Caesar's Gallic Wars. He was especially interested in Trier, at the apex of the Saar Moselle triangle, on his northern flank. The historic city of the Treveri, according to Caesar, had contained the best cavalry in Gaul. Patton wanted Trier. He inveigled the 10th Armoured out of Bradley and sent it to take the city.

We come to the end of February, the re-initiation to battle for the Tigers of the Tenth Armored. They are on the edge of taking Trier and then moving across Germany to cross the Rhine. A great deal will happen in the next 60 days.
at February 29, 2020
Email ThisBlogThis!Share to TwitterShare to FacebookShare to Pinterest
Labels: 10th Armored, 1945, 80th Armored Medical Battalion, after action reports, George Patton, Rick Atkinson, Saar-Moselle Triangle, Stephen Ambrose, Trier, World War II, WW II