Got up at 10. Did not do anything. Went to club. Was awful tired when I came home. Received 3 letters from Buddy.
Diary, Beula Keller Lehman

On Wednesday, 28 February the assault on Trier has begun by the 10th Armored CC B. After capturing the hill east of the city they raced down the hill from the northeast. This night blitz, including the dismantling of a roadblock, was accomplished in  the quiet of darkness enabling the Tigers to maintain an element of surprise.

Rampaging tank and infantry fighters of the U.S. Third Army’s 10th Armored Division crashed into the historic German city of Trier from three directions and swept ahead to cut off hundreds of Wehrmacht soldiers northeast of Saarburg.

The massive history available online The US Army in World War II, European Theater of Operations, has a section on The Last Offensive by Charles B. MacDonald. Here is part of the description of the taking of Trier.


In late afternoon, [of March 1] as both CCA's task force and CCB continued to run into trouble on the fringes of the city from pillboxes and 88-mm. antiaircraft pieces, Colonel Roberts, CCB's commander, ordered the commander of the 20th Armored Infantry Battalion, Lt. Col. Jack J. Richardson, to enter Trier along a secondary road between the other two attacking forces. Richardson was to head straight for the city's two Moselle bridges.

The night was clear, the moon full, and visibility excellent as Task Force Richardson in early evening started toward Trier. Entering the city before midnight, the task force encountered a German company with four antitank guns, but the surprised Germans surrendered without firing. One of the prisoners revealed that he had been detailed as a runner to notify a demolition team at one of the bridges when the Americans arrived.

Splitting his force, Richardson sent half toward each of the bridges. The northern team found its bridge blown, but the team moving to the ancient Kaiserbruecke, which had stood since the Roman occupation of Trier in the earliest days of the Christian era, reported its bridge intact. Rushing to the bridge himself in a tank, Colonel Richardson found his men under small arms fire from the far bank. Directing .50-caliber machine gun fire from his tank onto the far end of the bridge, Richardson ordered a platoon of infantry and a platoon of tanks to dash across. As the infantrymen complied, a German major and five men ran toward the bridge from the far side with detonating caps and an exploder.

They were too late.

It mattered not whether the delay in blowing the bridge was attributable to concern for the historic monument or to the fact that the German officer was drunk. What mattered was that the 10th Armored Division had a bridge across the Moselle.


[Sidenote: In Impact! Nichols adds to the story by reporting that the German major, in order to hide his failure, led the Tigers to seventeen other German officers who were revealing in another house. Hence the comment in the history report on what caused the delay in the blowing up of the bridge.]
By the morning of March 2, contingents of Combat Commands A and B had swept into all parts of the city, and the prisoner bag increased as sleepy-eyed Germans awoke to find American tanks all about them. Task Force Richardson alone took 800 prisoners.

The Army Newspaper Stars and Stripes told the story of the capture of the Bridge this way:


A Nazi hero, who sat in a barroom while forces smashed toward the bridge he was to protect, fiddled just long enough with his glass to enable the Tenth Armored “Tiger” Division to capture intact the strategically located Romer Bridge… Before the drunken officer could give the order to blow the bridge… the Tenth had taken it— and him.

According to the 80th Medical Battalion’s end of the month After Action Report, well over 350 were admitted to the battalion’s clearing stations in those two days. Company C was following in support of CC B.

March 2: Division HQ is moved into Trier. They occupy one of the more modern buildings that had been the SS HQ. 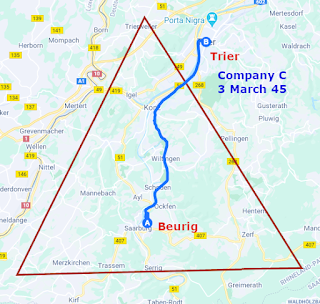 
Got up at 11. Did not do much. Wrote to Ruth. Had a cold or something. Could not talk.
Diary, Beula Keller Lehman

Trier was a city rich in history as the oldest city in Germany. It's capture was, Nichols says, "one of the most successful and spectacular battles of the war."


The Tenth Armored's combat performance in this operation was eminently successful. Detailed planning, high morale, and fighting ability all contributed to the significant victory in the Saar-Moselle Triangle and in the capture of Trier.  ...

In a signed statement at Nurnberg later German Field Marshals Goering and Jodl declared that the capture of Trier ranked with the Normandy invasion and the speedy crossing of the Rhine as one of the three most important phases of the war. (Nichols)


Got up at 10. I guess I feel better. Had a letter from Buddy and Dora. Wrote to Buddy, Ruth, and Dora.
Diary, Beula Keller Lehman

7 March 1945: Patton comes to visit the 10th Armored HQ in Trier. To everyone’s apparent surprise, he brings along Eisenhower himself!

Nichols tells us that prior to this visit rumors had been circulating that Eisenhower had sent a directive to Patton that he should not enter Trier:


Bypass Trier to the south… it will take four divisions to capture it.

Patton then immediately radioed Eisenhower to let him know he had just taken it with one armored division, adding:


What the hell do you want me to do… give it back to the bastards?

Nichols reports this as a “rumor” but relates it with all appropriate quotation marks and ellipses. So I asked myself, “Was it true?” It very well could have been since Patton really wanted to be the first to cross the Rhine- not Montgomery as was the official plan. He pushed and directed the Third Army and took advantage of every opportunity.- capturing Trier was one of those opportunities.


By March 1, Patton’s troops had captured Prüm and Bitburg; Trier fell a day later. Ike’s headquarters had estimated that it would take four divisions to capture the former Roman provincial capital of Trier, but Patton was able to send a message saying, “Have taken Trier with two divisions. Do you want me to give it back?”

I would guess there may be more than a little bit of truth in the rumor. In addition, March 1 was supposed to be the day Patton released the 10th Armored from his Third Army. Needless to say, it didn’t happen. It well could be another example of Patton’s ability to circumvent official directives or convince them to be changed.

Another quote from Rick Atkinson (Guns at Last Light) about Patton:


Battlefield carnage always inflamed Patton’s imagination, and the Saar-Palatinate proved particularly vivifying. In Trier, for instance, twenty air raids and Third Army onslaughts had reduced the city to 730,000 cubic yards of rubble. “The desolation is frozen, as if the moment of combustion was suddenly arrested, and the air had lost its power to hold atoms together,” wrote Private First Class Lincoln Kirstein, who would soon found the New York City Ballet. “Hardly a whole thing is left.” The entrance to the old Roman amphitheater still stood and that, coupled with his nightly readings from Caesar’s Gallic Wars, sufficed for Patton to inform his diary in mid-March that he “could smell the sweat of the legions.” It was all there for him: gladiators grappling with wild beasts; legionnaires and centurions “marching down that same road” now carrying his own legions; Caesar himself mulling how best to bound across the Rhine.