Got up at 10. Felt bad so I am not doing anything. Received a letter from Ruth. Wrote to  her. It is a spring day.
Diary, Beula Keller Lehman

The 10th Armored and Company C of the 80th Medical Battalion remained at Trier from 2 March through 15 March. It was a clean-up time around and northeast of Trier. Originally, Nichols tells us, the plan was that the 10th just clear the Saar-Moselle Triangle. Their efficiency and speed achieving that goal led to the capture of Trier as well. That then was to be the end of the mission until the actions of Col. Richardson’s Task Force captured the Romer Bridge. Again the combat operation was extended to crossing the Moselle and heading north to Wittlich. 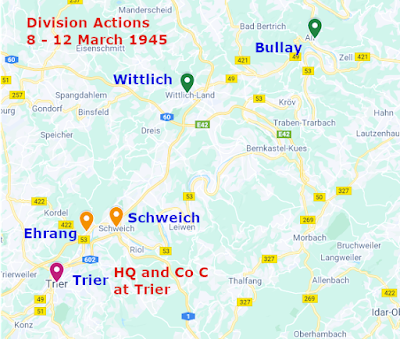 8 March 1945- After capturing Trier two Tiger forces crossed the Moselle and were within six miles of Wittlich, 20 miles north of Trier.

10 March 1945- Task Force Cherry entered the city and kept moving another 12 miles toward Bullay to seize the bridge there. They were not to be successful as the Germans had already destroyed it.

At the same time, CC B and CC R drove the Germans back just a few miles north of Trier at Ehrang. Unfortunately, work on repairing the bridgehead at Ehrang was slowed allowing the Germans to mount a specific attack on the infantry battalion and the battalion’s captain was killed among heavy casualties. A Task Force of CC R managed to cross the river and pushed the Germans from the hills on the high ground overlooking the town of Schweich.

Schweich was declared an “open city”. The Germans, according to Nichols, told the Division in a message that the town was


“undefended and sheltered 3,000 wounded Germans.” But when Task Force Chamberlain entered Schweich, they fond a devastating array of 88s, [88mm German anti-tank and anti-aircraft gun, perhaps the best overall and most feared of the German arsenal] mined streets, and instead of 3,000 wounded- they found but two German casualties. Nettled by the big lie, the tankers quickly seized Schweich. Shortly afterward, the acerbic Germans rained a steady stream of shells into that “open city”… resulting in heavy Tiger casualties there as the bombardment took its toll.

11 March- after two days of fighting the TF had neutralized the German threat and they returned to Trier.

By March 12 the Division was back together in Trier. They were resting in preparation for the move toward the Rhine.

Co C was assigned in support of CC B during this time. Looking at the battalion’s end of March After Action Report, the capture of Trier and the move toward Ehrang and Wittlich are reflected in the admissions to the three clearing stations. Between 1 March and 9 March over 1,300 admissions are listed, an average of 145/day. The numbers drop beginning on 10 march with less than half that- 615 admissions, 56/day- through 20 March.


Got up at 10. Changed the beds. Washed some. It is a rainy day.
Diary, Beula Keller Lehman

Reflections
In following my dad, Buddy, through the war I have also read a number of books by others who were in similar situations in World War II. One was the book Battalion Surgeon by the late Dr. William McConahey from Mayo Clinic. Captain McConahey was part of an infantry battalion surgeon medical corps from D-Day through the end of the war. I will be quoting him again later, but this particular quote from the preface of his book struck me at this point.


My horizon was quite limited. The war fought in division, corps, and army headquarters, where personal danger and discomfort were slight, was one of maps and lines and pins and shifting troops here and there- more like a fascinating game of chess. But the war I saw was one of mud and discomfort and suffering and death and terror and destruction.

I have the advantage of books and the Internet to put these stories in some semblance of order. As I read I can find out what happened when and in what order. Even in Nichols’ somewhat over-hyped prose, it all sounds clear and directed. I also know the end of the story. Through it all, though, I keep looking for ways to describe what my dad was going through. This quote does it as well as any. I am sure that the “mud and discomfort and suffering and death and terror and destruction” McConahey describes were real for Dad. Perhaps the transformation in him that war must exact on one’s soul, was why he may have been “Buddy” to his mother, but he was no longer simply a mother’s son.

We are now just shy of 8 weeks until the end of the war in Europe. There is still more of the chaos and destruction to come.
at March 12, 2020
Email ThisBlogThis!Share to TwitterShare to FacebookShare to Pinterest
Labels: 10th Armored, 1945, 80th Armored Medical Battalion, medics, morning reports, Saar-Moselle Triangle, Trier, World War II, WW II