#55- A Brief Respite and More Background


Got up at 11. Did not feel so good. Wrote to Buddy.
Diary, Beula Keller Lehman

75 years ago today, the 10th Armored/80th Medical finished a four-day break in the city of Trier. In the two weeks prior to the break they had, as pointed out in earlier posts, cleared the Saar-Moselle Triangle, captured Trier, crossed the Moselle and did some clearing up toward Wittlich and Bullay. According to Nichols in Impact, they took the opportunity to do some sightseeing in Trier, the oldest city in Germany of the old Roman Coliseum and other ancient remains.

The Tenth was about to go on a long trip. In the next six days, they will travel 83 miles and then over 100 more by the end of the month. In these movements, the 80th Armored Medical Battalion will change its organizational movement to match the original plans set out in the manual for Armored Medical Battalions. No doubt this aided in the work of the clearing station of the company. With the more rapid movement of armored units as compared to infantry units, they needed to make sure the patients in the clearing station were moved appropriately. To do that Company C would often move in two sections as we will see from here through the end of the war. 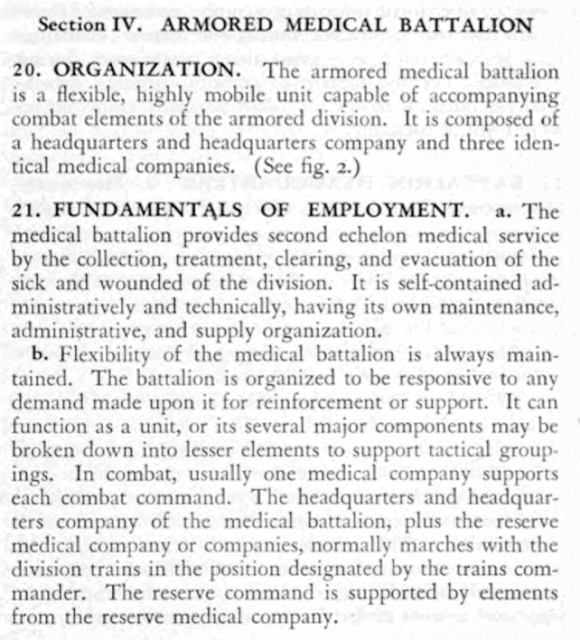 As shown in this screenshot of the 1944 Armored Medical Units Field Manual flexibility and mobility were essential. As will happen for the rest of March and all of April this will be the story of the 80th as the 10th Armored’s organic medical battalion. The battalion medical companies were referred to as “second echelon” treatment, i.e. not front line treatment. The Field Manual describes them this way.


✓    24. MEDICAL COMPANY. For details of organization, see T/O 8-77. The armored medical battalion includes three medical companies organized and equipped to be self- contained. The primary function of the medical company is to assure prompt and continuous evacuation of forward medical units, and to render medical care to casualties evacuated. Each medical company consists of a headquarters, a collecting platoon, and a clearing platoon.

In reading through the daily Morning Reports for Company C, my Dad’s company, there has not been any indication of three sections as listed above. I am sure there must have been some breakdown, especially considering there was a surgical team since my Dad’s duty was surgical tech. Whenever they would move, the Morning Report would almost always indicate that the “clearing station” was set up and then the troops billeted.


(1) This platoon consists of a platoon headquarters and two identical collecting sections. The platoon headquarters is equipped with a radio-liaison vehicle included in the group medical net (FM). It is capable of contacting all division medical units within range,
(2) This vehicle formally operates forward from the clearing platoon, contacting the aid stations and controlling and directing the ambulances of the medical company to battalion aid stations and casualty collecting points in the forward areas.
(3) Ambulances of the collecting sections operate forward from the clearing station to evacuate battalion aid stations and casualty collecting points established by the medical detachments.

Sidenote: there is a good memoir of a radio technician, Wire As a Weapon: Observations of a lineman with the 150th Armored Signal company laying wire from 10th Armored Division Headquarters to the forward units in 1944-45. (If you Google it, you will get lots of articles about the weapon a garrote wire for killing.)


Functions and operation. ( a ) This platoon is the nucleus of second echelon medical service in combat. The clearing station does not attempt surgical procedures better performed by specialized units of supporting medical elements. Its primary purpose is to perform emergency surgery, including amputation, to combat shock, to administer blood and plasma transfusions, tetanus toxoid, apply splints, and check dressings.


“Mobile Surgical Trucks” were truck-mounted ‘mobile’ operating rooms designed for temporary expansion of busy and overcrowded Hospitals! These units provided additional and self-sustained two-table operating rooms which could be utilized for all types of surgery. No additional burden was put on the Hospital, since the truck possessed its own autoclaves, surgical instruments, lighting, gloves, dressings, and linen. It must be noted that the Truck itself was only a means of transportation, while the ‘special’ Tent (carried in the trailer, together with the necessary power supply) provided with the Truck acted as the actual operating room. 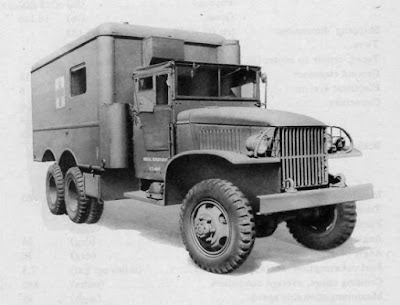 The Truck, 2 ½-Ton, 6 x 6, GMC, CCKW-352 (short wheelbase); 353 type (long wheelbase), aka “deuce-and-a-half” the US Army’s workhorse, was one of the best vehicles suited for this purpose. manufactured by the General Motors Truck and Coach Division of the Yellow Truck and Coach Manufacturing Company 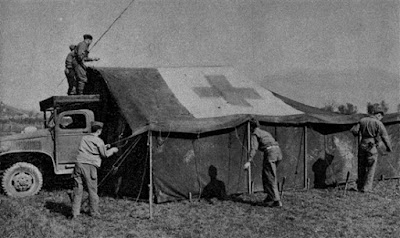 Illustration of a Surgical Truck and Tent, as introduced by the 47th Armored Medical Battalion. 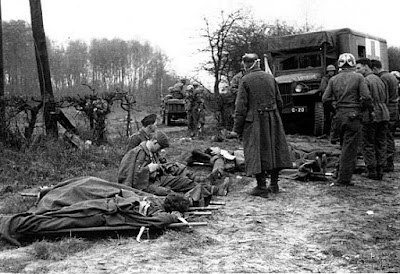 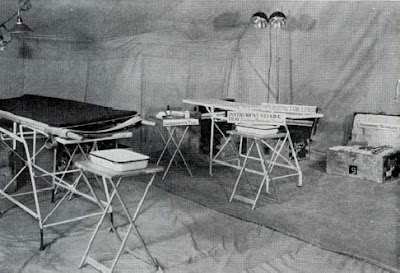 Partial display of basic equipment of two Mobile Surgical Trucks, set up in the appropriate Tent

Again, from the Field Manual:


Each surgical unit contains an operating table with operating lights, cabinets for supplies, instruments and sterile dressings, hot water heater with boiler, a supply of cold water, a sterilizing unit and facilities for ventilation and heating. Electric power is furnished by a gasoline-operated generator. Each surgical unit includes a specially constructed blackout tent to provide additional space for the treatment of casualties. One surgical unit has in addition the necessary items of equipment to treat gas casualties. In the event of an enemy gas attack, this unit operates for the emergency treatment of systemic symptoms incident to toxic gases and the emergency treatment of chemical burns. It is equipped to perform essential decontamination of personnel and equipment. (Field Manual)

As I mentioned above, part of the reason we will see in the coming weeks for the splitting of the clearing station into platoons or sections (both words are used to describe them in the morning reports) is for the efficiency of collecting and clearing the wounded. The Field Manual makes sure this is covered.

One other note during this brief break from the war from reading the Morning Reports:

When someone either joins the company or is transferred to another company, in most instances they indicate their race.  Race is almost always listed as “W”. This one was different:

MOS 303 was the duty code for "hospital orderly."

And on the homefront:


President Roosevelt said at a news conference that as a matter of decency, Americans would have to tighten their belts so food could be shipped to war-ravaged countries to keep people from starving. (Link)