Combat commands of the 10th Armored Division began passing through infantry of the 80th and 94th Divisions before daylight on 16 March. Although the Germans of General Hahm's LXXXII Corps during the night had formed a new crust of resistance sufficient to deny genuine armored exploitation for another twenty-four hours, no doubt remained among either American or German commanders as the day ended that a deep armored thrust was in the offing. (Hyperwar)

As worked out in detail by Patch and Patton, the two armies split the area between the Nahe River and the Rhine almost equally, with a new boundary running just north of Kaiserslautern and reaching the Rhine south of Worms. Patton nevertheless intended to take Kaiserslautern himself and then turn one infantry and one armored division southeast, deeper into Patch's zone, to link with the Seventh Army's VI Corps along the Rhine. Thereby he hoped to trap any Germans who might remain in front of the Seventh Army in the West Wall. That accomplished, Patton "would clear out of [Patch's] area."51 The plan presumed, of course, that the Seventh Army at that point would still be involved in the West Wall, but in any event, Patch apparently accepted the agreement with the same good grace earlier accorded the Supreme Commander's proposal.


It took another day before the effects generated by the heat began to show up on headquarters situation maps, but by 19 March a graphic representation of the Third Army's gains looked, in the words of Patton's colleague, General Hodges of the First Army, "like an intestinal tract."53 With the added weight of the 12th Armored Division (Maj. Gen. Roderick R. Allen), General Walker's XX Corps made the more spectacular gains. By midnight of the 19th, the 12th Armored was across the upper reaches of the Nahe and had gone on to jump a little tributary of the Nahe, more than twenty-three miles from the armor's line of departure of the day before. The 10th Armored Division stood no more than six miles from Kaiserslautern. (Hyperwar)


Got up at 10.30. It is raining.Changed the beds. Had a letter from Buddy. He is in Germany. Wrote to Ruth and Dora.
Diary, Beula Keller Lehman

There were 152 admissions in the three companies of the 80th Medical Battalion on the 21st; there will be another 205 ton the 22nd as this drive south continues. Hence Company C will remain at Schopp for an extra day. They have traveled 83 miles in these six days.

[The] 10th Armored Division [was turned] south and southeast into the Pfaelzer Forest. By nightfall of 20 March, two of the 10th Armored's columns stood only a few hundred yards from the main highway through the forest, one almost at the city of Pirmasens on the western edge, the other not far from the eastern edge. A third was nearing Neustadt, farther north beyond the fringe of the forest. The 12th Armored meanwhile was approaching the Rhine near Ludwigshafen. Not only were the withdrawal routes through the Pfaelzer Forest about to be compromised but a swift strike down the Rhine plain from Neustadt and Ludwigshafen against the last escape sites for crossing the Rhine appeared in the offing.

In desperation the Luftwaffe during 20 March sent approximately 300 planes of various types, including jet-propelled Messerschmitt 262's, to attack the Third Army's columns, but to little avail. Casualties on the American side were minor. Antiaircraft units, getting a rare opportunity to do the job for which they were trained, shot down twenty-five German planes. Pilots of the XIX Tactical Air Command claimed another eight.

In the face of the 10th Armored Division's drive, the word to the westernmost units of the XC Corps to begin falling back went out late on the 20th, and when the 42d Division, in the mountains on the left wing of the VI Corps, launched a full-scale assault against the West Wall late the next day, the attack struck a vacuum. Soon after dawn the next morning, 22 March, a regiment of the 42d cut the secondary highway through the Pfaelzer Forest. A column of the 10th Armored had moved astride the main highway through the woods and emerged on the Rhine flatlands at Landau. Any Germans who got out of the forest would have to do so by threading a way off the roads individually or in small groups.

By nightfall of 22 March, the Germans west of the Rhine could measure the time left to them in hours. (Hyperwar) 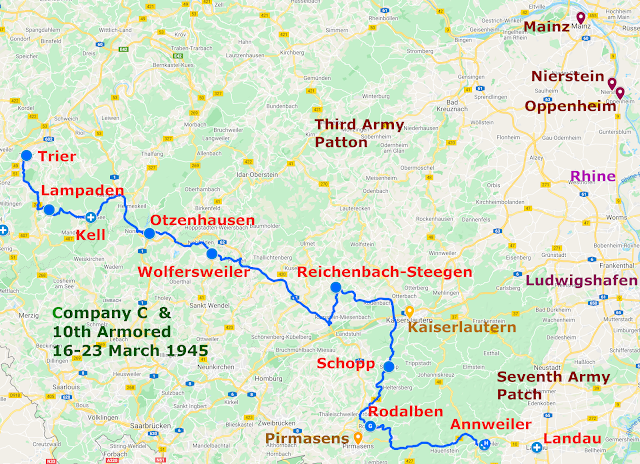 (Note on this map: I have tried to give the scope of what was happening during this week with Patton racing to cross the Rhine before Montgomery. As such he utilized the 10th Armored to block the southern escape route. In so doing, as described in the text, he moved the 10th and its units out of the Third Army territory, crossing them into the Seventh Army of General Patch. Hence all the different places listed in this map with the movement of Buddy's Company C shown in blue as usual.)

By March 23, the Third Army engineers were ready, and Patton, desperate to cross the great river before Monty, decided that his men should make a feint at Mainz and cross at once at Oppenheim. By daylight on the 23rd, six battalions were over the river for a loss of only 28 men killed and wounded, while other infantry and engineer units had crossed just to the north, at Nierstein, without opposition. Patton telephoned Bradley: “Brad, don’t tell anyone but I’m across … there are so few Krauts around there they don’t know it yet. So don’t make any announcement. We’ll keep it secret until we see how it goes.”

However, the Germans soon became aware of the crossings and after heavy Luftwaffe raids on the Third Army pontoon bridges during the day, Patton called Bradley again that evening: “For God’s sake tell the world we’re across … I want the world to know Third Army made it before Monty.”

In fact, the world already knew. At Bradley’s headquarters that morning, Patton’s representative had announced that the Third Army had crossed the Rhine at 10 pm on March 22, “without benefit of aerial bombing, ground smoke, artillery preparation and airborne assistance.” Clearly, this was a dig at Montgomery, who was using all these assets at that very moment to assist his crossing of the same river. (Warfare Network)

They have now traveled a total of 115 miles in 8 days. They still have a week to go in the month.

It appears that, as a result of the coordinated efforts between Third and Seventh Armies, the 10th got to the right place at the right time. Now they will be attached to General Patch’s XXI Corps, 7th Army for the rest of the war. Patton has utilized them well on his own personal race to the Rhine. Now they move to other things.