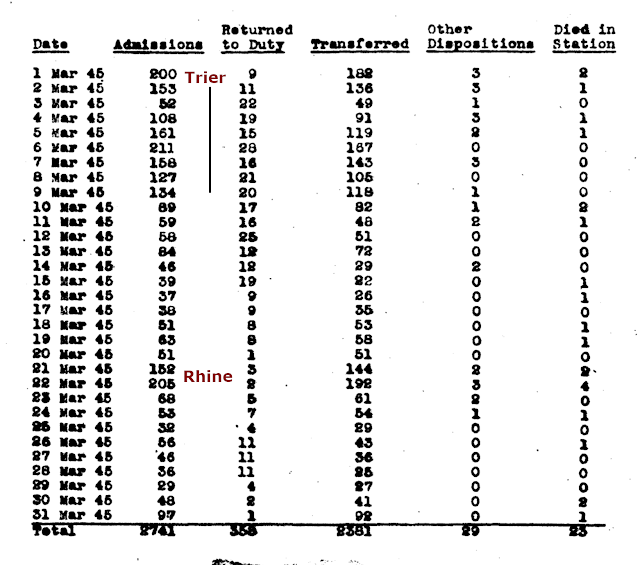 And, as usual, what might be needed to make things better. This reflected the change that occurred in March when the 10th moved right out of Third Army territory into the Seventh Army,

On March 12 I posted a quote from the book Battalion Surgeon by the late Dr. William McConahey from Mayo Clinic. Captain McConahey was part of an infantry battalion surgeon medical corps from D-Day through the end of the war. I also discovered a lengthy interview from 2003 with McConahey online as part of the Library of Congress’s stories from the Veterans History Project. Here are some excerpts that helped me find out a little more about the situation Buddy was facing on a daily basis. This was life on the front lines of the war:


Well, they call you a battalion surgeon. I did no surgery, really. I was simply trying to save lives. They bring in the wounded to the Aid Station, first thing is to stop bleeding. And then give lots of morphine for pain. We used a lot of that, sometimes intravenously. And set fractures, and cleaned out the wounds, which were mess. Often they were filled full of dirt and debris and grass and torn uniforms. Cleaned them out good. Now we had no antibiotics in the days, except we had some sulfa powder. No penicillin. They had it back on base, in the hospital behind us, but we didn't have any. We'd sprinkle some sulfa in on the wound and put on a sterile dressing and pack it wide open and send them on back. We also gave tremendous amounts of blood plasma. We had no whole blood, but these were, we had cases of one bottle of sterile water packed under pressure and a bottle of blood plasma powder packed under vacuum. See, this was blood plasma with no red cells, but just dried protein part of the blood which gave the body and brought them back out of shock. They put these two bottles together with double ended needle and stuck the water bottle into the plasma bottle and in about 30 seconds you had a bottle of blood plasma. We put it intravenously and we gave that by the bucket full. We have hundreds and hundreds of those things in the Aid Station. And that would get them out of shock in a hurry and that's what saved lives time and again, was the blood plasma we had.

I had 32 men in my medical Aid Station and one officer, assistant battalion surgeon with me, another captain. Then these 32 enlisted men. Of those, 12 were company aid men. These guys lived up on the front lines with the company. [The aid men] would lie in the foxholes with the rifleman and they'd say "medic" and they'd run to the aid of the wounded and they would put on a doggone as good dressings I ever saw, lying on their bellies and the bullets going over their heads. How they did it, I don't know. Did quite a job. And then they would let us know in the Aid Station if there was some wounded up on the front line with walkie talkie radio we had. So I'd send up a litter squad, four men on a jeep, and a jeep driver, and he would take them as far as he could forward, then they would walk across the fields until they found the wounded man was. See, no helicopters then. So they'd put them on a litter, haul them back to the Aid Station and bring them back to me and we'd take care of them. So we had these twelve men on the front lines, eight litter bearers, two jeep drivers, and ten technicians to help me in the Aid Station. They would help clean wounds out, give plasma, all the rest, helped me a great deal in the Aid Station. That's what we had in our group.


Question: Now, how far were you from the actual fighting, in the Aid Station?

We'd try to find a house to get into, or a shed, or something, because you couldn't work out in the cold. … So we got as close as we could to the front lines so we weren't under actual fire. Maybe about a quarter a mile behind the front line, something like that. And then we would go to work and they would bring the wounded into us on the Aid Station there. And once they were in good shape, we put them in the ambulance and send them back to the Collecting Company, the next group behind us, which is about five miles back. And then they would look them over. If they were okay then, back to the Cleaning Company, ten miles to the rear, and that was almost a small hospital, with a couple of surgeons. They could do emergency surgery if they had to at that time.

[Note: This would explain why the location for Company C was almost always given at a distance behind the front. It is also important to remember that all of these were part of the company. I have no way of knowing at this point where Buddy was assigned. As a “surgical tech” I would guess it would have been in the Collecting or Clearing Company, but I am not sure.]


If they weren't badly wounded, they stayed in the Clearing Company for maybe a week or so, if they were back in good condition, send them back to the front. If they weren't, they would go on back then to an evacuation hospital or a field hospital, something behind maybe 30-40 miles to the rear and be taken care of there. And then, if even more badly wounded, they'd take them on back to England. And they might be there for a couple months, get them fixed up, then ship them back to the front, go back to duty. If they were badly hurt, send them on back home, sometimes, then too after that.

[Note: Next comes the question perhaps most often asked of medics- did you carry a gun?]


Question: Or did your men carry guns? You had no protection, then, really.

No, we didn't carry guns because the Germans had signed what they called the Geneva Convention, in which they said they would not try to shoot at Aid people. So we all knew that and we had red crosses painted on our helmets on all the four sides. We had red crosses on our arms. Our jeeps carried red cross flags. I know that my life was saved many times by Germans not shooting at us. We didn't carry any weapons and they knew that. And often they had me in their sight, they wouldn't fire. It happened, I know, several times. I had been fired at, [?] one man took a shot at me and missed me by about four inches. That happened now and then, but usually they did not shoot at us. So we were safer to be without arms than to be carrying them.

[We] all were marked this way. Well, one time I just briefly mentioned this. I went behind lines by mistake one time. I was trying to find the Aid Station after I had gone back to check with the Collecting Company. I was coming back in the jeep and I missed a turn-off. I went back behind German lines by two miles, didn't know it. I came around a corner and down the road the German had a tank gun, pointing right at us, ready to fire the thing, the first tank or trunk that turned the corner. They didn't shoot. They saw the Red Cross flag on the jeep... they didn't shoot because we were medics... [and] all around us and the sides of us were little German soldiers digging foxholes, the guns right beside them. They looked up and wondered what was going on. Well, the driver jammed the jeep in reverse, went back up and around the corner and out of there, but they could have killed us, captured us, but they didn't, because they saw we were medical corps people.(Link)

As March ended, the 80th Medical and the 10th Armored were in the midst of their final month of combat. VE Day was less than 40 days away. Their movement over the next few weeks will get them in their final position, but also remind them of the ghastly evils that were everywhere to be found in this horrific war.


Got up at 9.30.  Went to the butcher shop. Baked. Had a letter from Buddy and Ruth. It was cool tonight.
Diary, Beula Keller Lehman